After massive back-to-back scoring outputs from Giannis Antetokounmpo and a win in the Milwaukee Bucks‘ first home game of this series, Game 4 of the NBA Finals significantly raises the stakes for both teams.

The Phoenix Suns can take a commanding lead with a win on the road, or the Bucks can tie the series and guarantee third home game in Game 6.

Our NBA analysts are taking that all into account and have found five bets for tonight’s matchup with value. You can find their analysis and picks below. 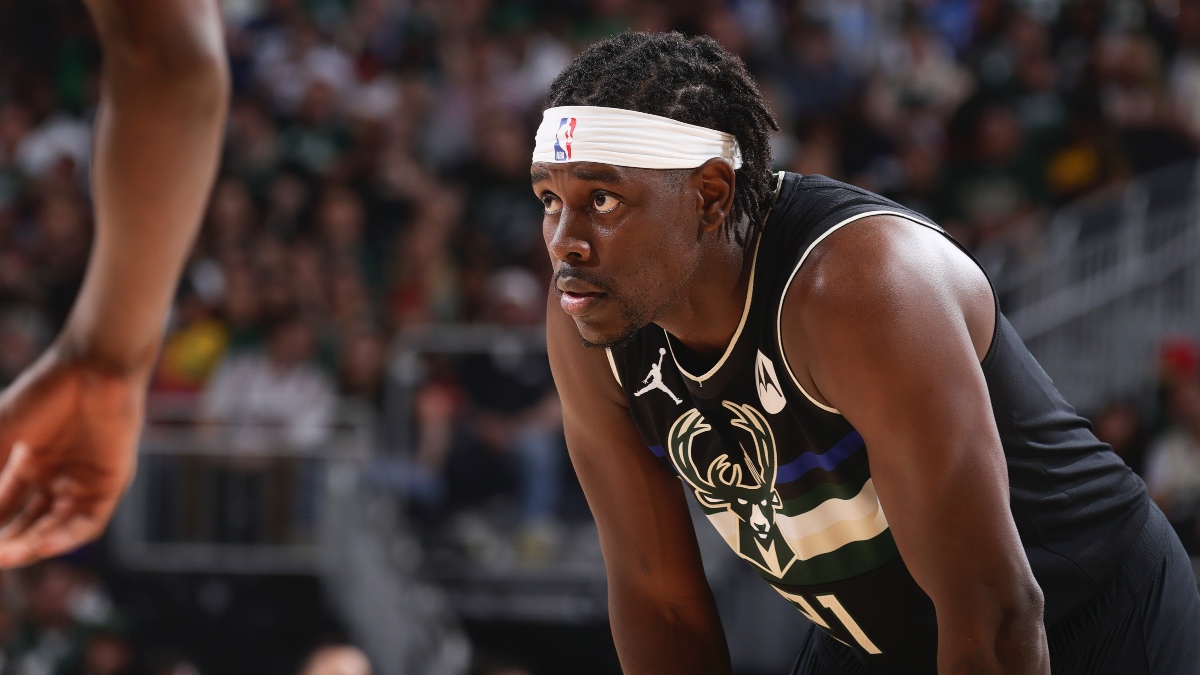 Joe Dellera: Jrue Holiday has struggled with his shot for the majority of the postseason, but that has not impacted his minutes due to his excellence on defense and as a facilitator for this Bucks’ offense. With his minutes up nearly seven minutes compared to the regular season, he’s seen even more opportunity to rack up counting stats.

Throughout the course of the playoffs, Holiday has averaged 5.6 rebounds per game compared to 4.5 during the regular season. He’s gone over 4.5 rebounds in 12 of 20 games the playoffs but he’s had more than 4.5 in six consecutive games dating back to the Eastern Conference finals.

He’s one of the best rebounding guards in the league and ranks in the 80th and 60th percentile of combo guards in offensive and defensive rebounding percentage during these playoffs, per Cleaning the Glass.

Considering the Suns are down to just one true big man in Deandre Ayton, this opens up more rebounding opportunities for Holiday. Our Action Labs projections anticipate 5.4 rebounds tonight from Holiday. I laid the juice with the lower number at 4.5, but there’s value on his over at 5.5 (+120). 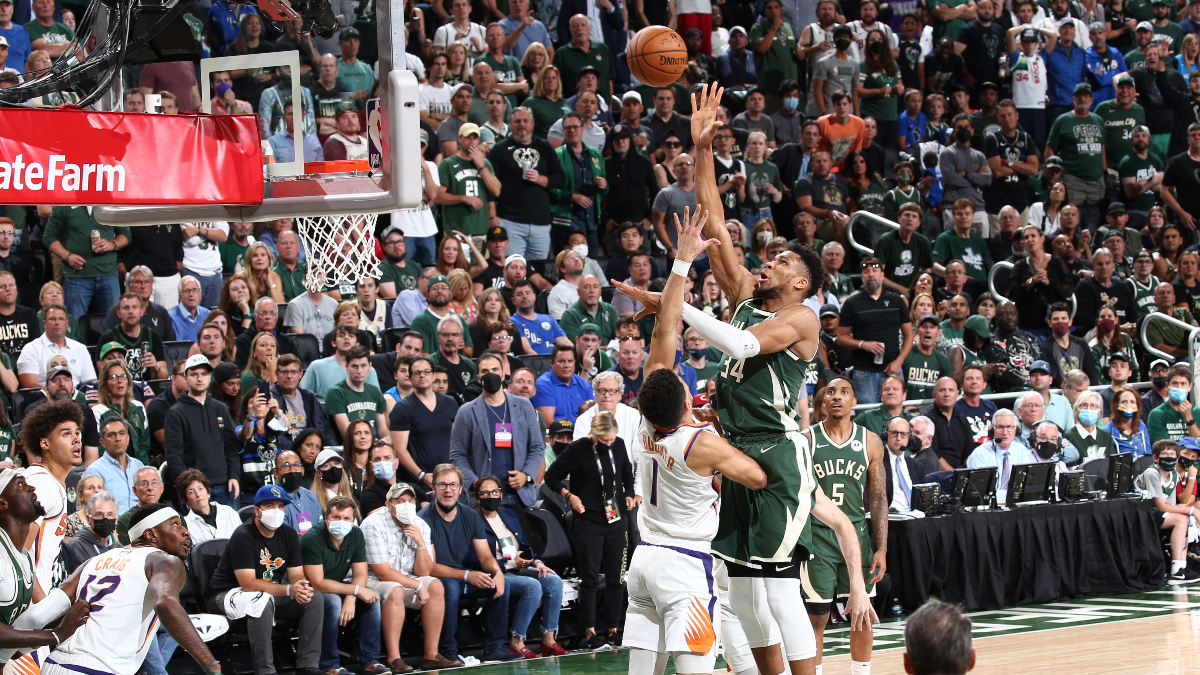 Austin Wang: It has only been two days, but it feels like an eternity. Game 4 of the NBA Finals is Wednesday evening as the Bucks look to even up their series against the Suns at home.

The Bucks were dominant in Game 3 with their backs against the wall. They are now 7-0-2 against the spread in the first half as home favorites and this trend will be active again in Game 4. However, the Suns are a resilient team and Bucks may not have that sense of urgency as in Game 3, so I am undecided on whether or not the Bucks can continue the trend.

Instead, there’s another angle where I find value. The total points in the third quarter for each game in this series are 62, 65, 69. These teams have picked up the pace and offense to begin the second half and have flown over the third quarter total in each game.

This has not just been occurring in this series. Both teams have tendencies to score a bulk of their points in the third quarter all season long before they slow the game down dramatically in the fourth quarter.

The third quarter total for Game 4 is 56.5, 25.6% of the current total of 221. The numbers show an edge on the over. I can see the defense tightening up here in this Game 4, but based on the historical data and each team’s tendencies, I recommend playing the over on the third quarter total.

Let’s root for another fun, fast-paced and high-scoring third quarter. 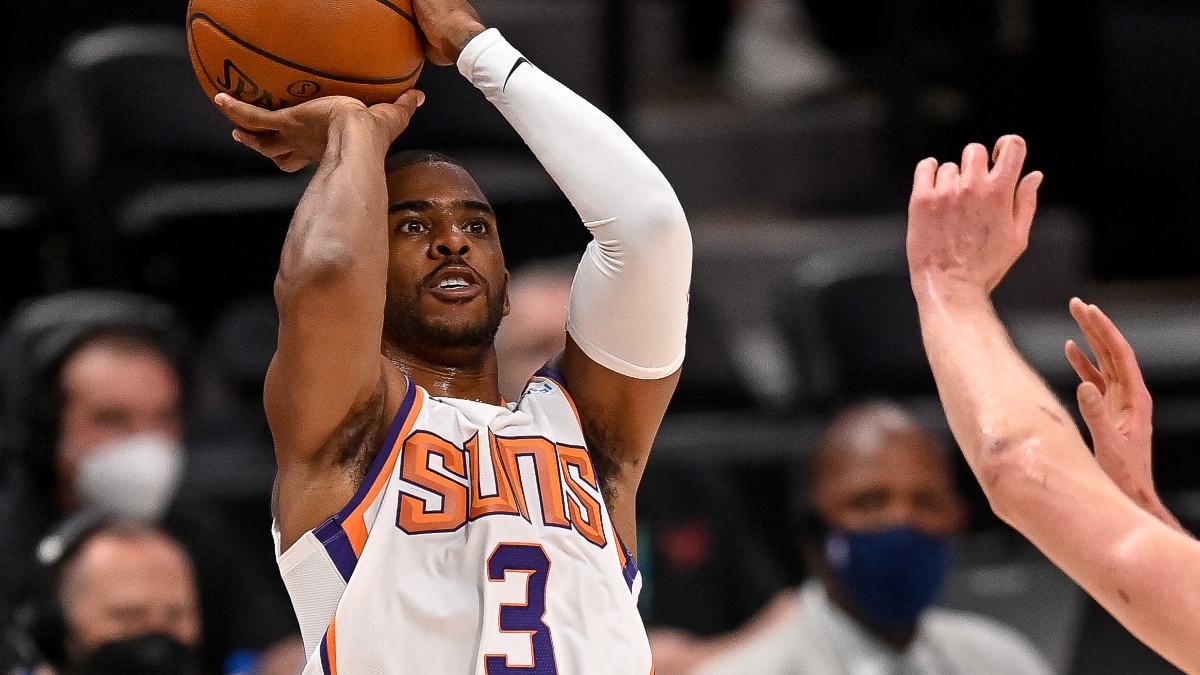 One thing is clear, neither of these teams are stopping one another. With the schedule for the NBA Finals giving teams multiple days off between games, I’m not expecting to see the war of attrition weigh on these teams as much as we’d normally see in a playoff series.

Surprisingly we still haven’t seen both teams have monster games offensively and this feels like the game where it happens. The Suns had an Offensive Rating of just 103.1 in Game 3, their fifth-lowest in 18 playoff games.

Four of their five worst offensive performances came against the Lakers and Clippers during games with either Chris Paul or Booker banged up. That won’t be the case here as both should find ways to bounce back from abysmal shooting performances from behind the arc as Paul shot 1-of-4 from deep and Booker shot just 1-of-7.

Overall, you can expect the Suns to matchup hunt the Bucks’ switching coverage. If Deandre Ayton is able to stay out of foul trouble, it’s not out of the question to see him follow up the 22-point 19-rebound performance he had in Game 1.

If he is in foul trouble, we’re going to see the Suns go small and attempt to space the floor and spread out the Bucks big lineup.

The contrasting mix of styles makes for such an intriguing series and we’re seeing the Bucks capitalize inside as the Suns have no answers for Giannis Antetokounmpo whose back to back 40-point, double-digit rebound performances are reminiscent of Shaquille O’Neal in the 2000 Finals. Antetokounmpo made just one shot out of the restricted area in Game 3 and the Bucks as a whole scored 54 points in the paint.

The Suns ranked last in opponent field goal shooting frequency at the rim (27.2%), so this appears very sustainable. Of course, shots at the rim also mean free throws and the Bucks have shot 49 free throws over the past two games.

Khris Middleton and Jrue Holiday have proven that they play better at home as do the other Bucks role players, so I’m expecting the Bucks to roll offensively at home. With a little positive regression from the Suns offense in Game 4, this should go over the total of 220.5. 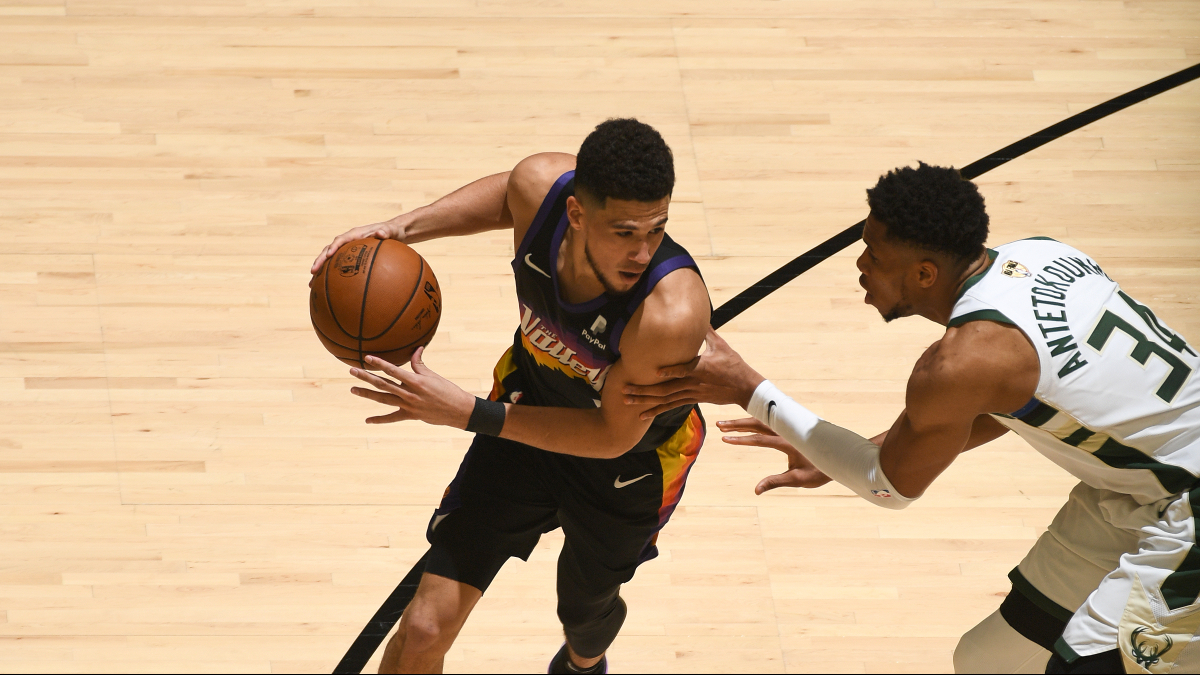 Kenny Ducey: I see this line as somewhat narrative-driven.

The Bucks have faced adversity all postseason long, coming back from 2-0 down against the Brooklyn Nets and dropping the first game at home against Atlanta. There were other factors working in their favor in those series, with the Nets banged up and the Hawks playing some uninspired defense.

This is a different story.

The Suns can test this defense like no opponent has been able to, and as long as things stay in the halfcourt the Bucks are definitely at a disadvantage.

The Pace in the past two games has been slowed to 97 and 94, two numbers that are bad news for a team that has thrived in transition all season long. The Suns’ defense is stronger than Atlanta’s and Brooklyn’s, and it showcased in the first two games of the series just how apt it is at making life difficult for Milwaukee’s role players.

It’s true that the shooting splits are off the charts for Milwaukee at home, but that alone won’t get them this game. Phoenix should return to controlling the frontcourt and I expect more scoring contributions from Mikal Bridges and Devin Booker (as Matt Moore screams “VARIANCE!”).

Simply put, the price on the Suns, a team that is far superior here, is very enticing. They don’t have the best player in this series, but their defense is as good as Milwaukee’s at worst, and their offense is far more efficient as long as we’re slowed to a half-court game once again. 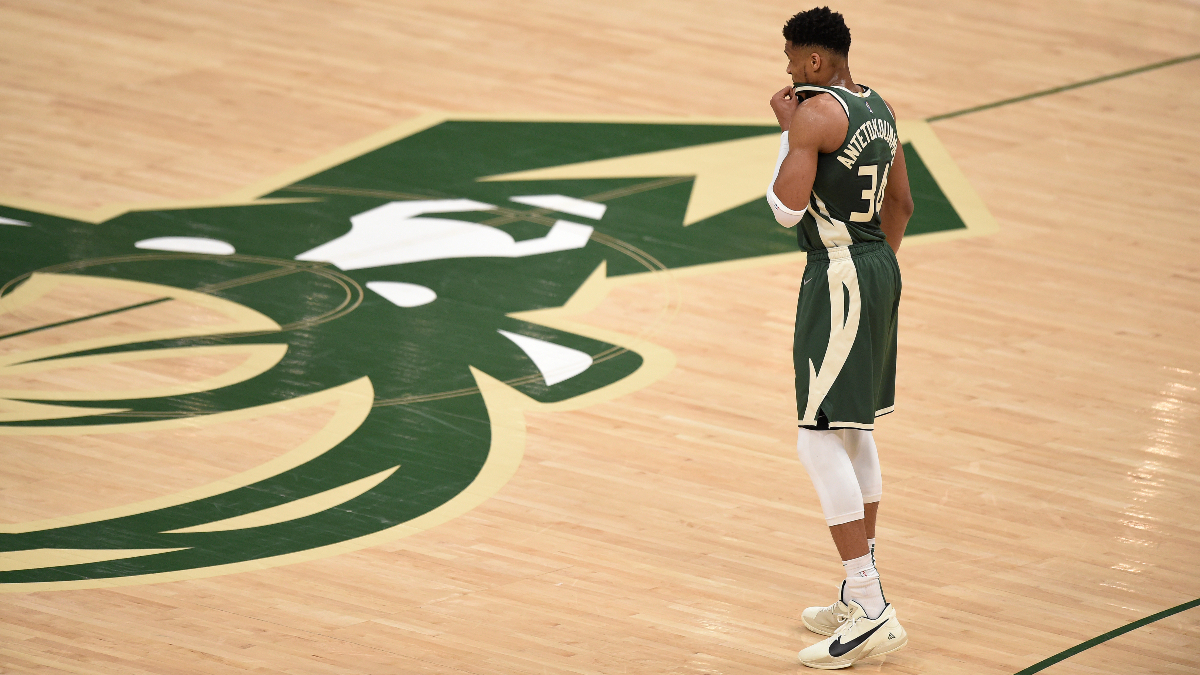 Brandon Anderson: Yes, we’re betting against Antetokounmpo, who’s currently destroying everything in his path. And yes, we’re doing right after 42- and 41-point games, as he might finally be claiming his crown as NBA king.

And those 40-point games are exactly why we’re betting against him. That recency bias has jacked this line sky high, a full eight points greater than where Antetokounmpo opened the Finals at over/under 26.5 points. And to be fair, we didn’t know he’d be looking this healthy then, but that’s still more than a 30% increase on the line in one week, which is crazy.

Per Basketball Reference, Antetokounmpo had never scored at least 40 in back-to-back games before these last two efforts. In fact, he’s only scored 35 in consecutive games five times during his career and never in the playoffs until this week. He’s hit 35 points more than twice in a row just one time ever.

And why is that? Well, 35 points is a lot, even even for the Greek Freak.

Antetokounmpo has scored below 35 in 15 of his 18 playoff games this year. That’s an 83% hit rate to this under, which is right about in line with his 79% hit rate from the regular season.

It’s really hard to score 35 game after game, especially when you’re basically a non-threat to rack up quick points on 3-pointers. Notice that Antetokounmpo has hit 24 of 35 free throws the past two games. Neither one of those numbers is sustainable. He won’t get so many free throws every game, and he’s probably not going to keep hitting 69% of his attempts either.

Antetokounmpo is averaging 12 points from the line the last two games, up from 8.3 points the rest of the playoffs. He’s also been nearly unstoppable on two-pointers at 28 of 38, which is an absurd 74% shooting percentage.

Even for a two-time MVP, that’s not sustainable. You know Phoenix is going to pack the paint, build a wall and do everything it can to force someone else — anyone else, really — to beat them in Game 4.